Royal intermarriage, when royals marry other royals, has occurred as long as monarchies have existed. The some members of the Ptolemaic Dynasty of Egypt married their blood siblings; Cleopatra VII and her brother Ptolemy XIII (the famous Cleopatra) are an example from the classical period. Medieval Europe saw a significant amount of intermarriage among royal families that often resulted in remote inbreeding which occurs when a husband and wife share many ancestors but are not superficially closely related.

While royal marriages were often marriages of convenience to cement an alliance, some families married to keep their family in power and exclude other families from claiming their titles. Basically, any time either a female became the monarch (e.g. Queen Victoria of the United Kingdom) or a king had only daughters, they would be the last ruler of their royal house. If the daughter-princesses married men of other noble families in an alliance and had male children with them, the oldest male child would succeed to the throne when the king died under the name of his father, not his mother and the previous king. Queen Victoria was the last British monarch of the House of Hanover; her husband Prince-Consort Albert of Saxe-Coburg and Gotha passed his name to his children and Edward VII ruled as a member of the House of Saxe-Coburg and Gotha. Therefore, some families thought if they only married within their own dynasty, they would anchor their family to its dominions for generations to come. Some families were more notorious than others for their close marriages. Dynasties that were especially prominent in their marriages between close relatives included The House of Wittelsbach of Bavaria, the British Royal Family, especially the House of Hanover, and Hapsburg Dynasty, especially the Spanish branch. The Wittelsbachs had aunt-nephew and uncle-niece marriages. The Hanovers married as follows:

Interestingly enough, another way to keep the family name as the ruling dynasty of a state is to make it the law. George V of the United Kingdom was born a member of the House of Saxe-Coburg and Gotha (a descendant of Queen Victoria and Prince Albert of Saxe-Coburg and Gotha). However, with the start of the Great War against the German Empire, anti-German sentiment ran high and the King of England denounced his German titles, taking the name Windsor. The current British royal family is the House of Windsor. However, a queen currently rules Great Britain! She would traditionally be the last monarch of the House of Windsor and when Charles, Prince of Wales succeeds to the throne, he would take the name of his father's family (Prince Philip who was a Greek prince before marrying Elizabeth). Charles would belong to the House of Schleswig-Holstein-Sonderburg-Glücksburg (House of Glücksburg for short) and rule under that name. However, by royal decree and law, Charles will remain a Windsor and rule under that name, a continuation of the House of Windsor (itself a cadet branch of the House of Saxe-Coburg and Gotha despite the denouncement of German titles by George V).

The House of Hapsburg took marriage within its own family to the extreme over many generations. The House of Hapsburg, which originated in what is now Switzerland, produced many Holy Roman Emperors and ruled the Austrian Empire (and later the Austro-Hungarian Empire) and the Spanish Empire for centuries. Franz Ferdinand, whose murder kicked off World War One, was a Hapsburg (of the cadet branch Hapsburg-Lorraine). However, one may recall that while Franz Joseph I of Hapsburg-Lorraine ruled the Austro-Hungarian Empire during WWI, Alfonso XIII of the House of Bourbon ruled Spain in the same time period. How did the Hapsburgs, an immensely important and powerful dynasty lose the Spanish monarchy? The answer is inbreeding. 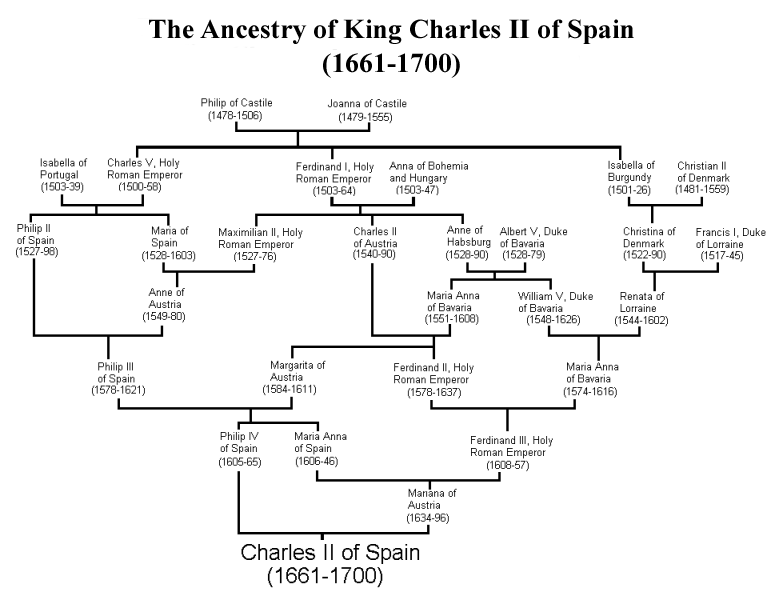 King Charles had grave physical and mental illness. It is rumored that at one point in his life he exhumed the bodies of many of his ancestors to have a look at their corpses. It is suspected that he had two rare genetic diseases brought out by remote inbreeding called combined pituitary hormone deficiency and distal renal tubular acidosis. He may have also suffered from acromegaly either instead of or in addition to one or both of the disorders listed above. He also had mandibular prognathism (more on that below).

Charles II was frail and fragile; he couldn't walk until he was eight years old and was by all modern standards retarded (however, he did not have any known trisomy disorders). He was exceptionally unattractive and had a severe lack of intellect and emotional stability. He was most likely sterile and it has been suggested that neither of his marriages, one of which ended in divorce, were ever consummated. His tongue was very large and he his underbite caused him to be unable to chew food. He could barely be understood when he spoke and he drooled on himself. He died young, five days short of his 35th birthday, probably from a heart defect. His lack of an heir (and therefore his inbreeding) directly caused the fourteen-year long struggle that was the War of Spanish Succession, when as many as maybe half a million soldiers went to war to determine who would rule Spain.

Charles was the last in a long line of increasingly deformed Spanish Hapsburgs. Although he was the extreme, other members of the family had the same jaw deformity that he had, mandibular prognathism. The condition was so common in the Hapsburg family that it became known as the Hapsburg Lip or Hapsburg Jaw. It is characterized by a large underbite and protruding "strong" chin. The deformity supposedly entered the family from a Polish princess of Piast Dynasty. Notable members of the family with it were Charles I of Spain (Charles V, Holy Roman Emperor), pictured above, Ferdinand I, Holy Roman Emperor, pictured at left, and of course Charles II of Spain, also pictured above. Generations of rulers had the deformity and it still can be seen, albeit in a very diminished feature, on the current King of Spain, Juan Carlos I of the House of Bourbon but also a descendant of the Hapsburgs.

Finally we must remember that portraits are not photographs! They are approximations of what people looked like but were usually embellished to make the person pictured look better. Charles was probably even worse off than he looks from his official portraits. Imagine if you were approached by a powerful king from an even more powerful family to paint a portrait of him. Would you include the acne scars on his cheeks? Varicose veins? Rosacea? I think not. So remember the portraits we see are idealized, representing a possible best-case-scenario.

it was not poor Charles II's fault that he was born deformed though. His family's avarice for power and wealth and unwillingness to take the risk of sharing that power with outsiders caused him to have less genetic diversity than a child of a brother and a sister. It is always the innocent victims of circumstance and birth that we seem to take pity on and Charles II, who could have had anything as King of Spain during the peak of the Spanish Imperial period but could not even chew his own food, certainly deserves our pity.
Posted by MLRscimitar at 11:39 PM