The Madness of King George: A Misunderstood King

His Royal Highness the Prince of Wales, George William Frederick (June 4, 1738-January 29, 1820) became King of the Great Britain and Ireland as George III on October 25, 1760 when his grandfather, King George II, died after passing out unceremoniously and unfortunately while using the toilet early in the morning. The former king had lived to the age of 77, longer than any recorded English monarch up to that point. The new monarch was only 22 years old when he took the title King and 23 at his coronation but he had extensive schooling from his tutors and, unlike the previous two British kings of the House of Hanover, spoke English as a first language (instead of German), never visited the Electorate/Kingdom of Hanover in Germany which he became king of eventually, and was wholeheartedly British.

However, the king had a dreadful problem. He suffered from several episodes of serious physical and mental illness throughout his life that were well-documented thanks to his high station. It is widely believed now that the king had a hematological disease called acute intermittent porphyria (AIP). First of all, unlike other royal afflictions such as mandibular prognathism in the Hapsburg family (more on that another day), porphyria is not the result of marriage between close relatives (inbreeding). Rather, AIP is a hereditary disease that is autosomal dominant, meaning that someone affected by it has a 50% chance of passing it on to each of his children. The disease can lay dormant for one's whole life and often needs a trigger (like a change in medicine, stress, diet, etc.) to bring out an acute attack, explaining why neither of George III's parents had notable symptoms. One of King George's descendants, Prince William of Gloucester (December 18, 1941–August 28, 1972) was diagnosed with variegate porphyria (VP), a similar porphyria with hepatic and cutaneous symptoms and autosomal dominant inheritance pattern.

An attack of acute intermittent porphyria is manifested by a wide range of symptoms. The actual cause of the attack is the absence of an enzyme, porphobilinogen deaminase, that converts a chemical called a porphyrin into heme, a component of hemoglobin, the iron-based chemical in red blood cells that carries oxygen around the body. Porphyrins are toxic to the body in high doses and attacks occur when stress, diet, or something else causes the body to not be able to filter the excess porphyrins. Pain is severe and most often located in the abdomen and the hands and feet (peripheral neuropathy). Often pain needs to be treated with IV morphine or other equally strong narcotics. Insomnia is common. Nausea, vomiting, constipation, and diarrhea all can occur. Muscle weakness, seizures, headaches, forgetfulness and confusion are often the neurological symptoms. The heart races and tachycardia (high heart rate) and hypertension (high blood pressure) are not uncommon even when an attack is not occurring. Psychiatric problems can occur and can sometimes be the only manifestation of the disease. Often individuals afflicted with porphyria are simply depressed and have anxiety issues but in more severe attacks serious cases of paranoia and psychosis can occur. Finally, AIP is often marked by a distinct purple color in urine and stool during an attack, hence it's name which is related to the Greek word for "purple" (a book about George III's porphyria is titled Purple Secret). There can often be other symptoms. There is no cure and the treatment is usually just of symptoms. One medicine, called Panhematin is available to treat the cause of porphyria but requires an IV and is difficult to find as most hospital pharmacies do not carry it and only one company in the United States makes it. Other than Panhematin, IV glucose (sugar) is used sometimes because carbohydrates are known to help stop attacks. Opiates are used for pain, phenothiazines are used for nausea, and benzodiazepines are, very cautiously, used for seizures. Barbiturates and many other drugs are known to be porphyrogenic, i.e., trigger attacks of AIP. Arsenic, now known to be poisonous in any individual, is one of the most dangerous substances to ingest for someone with any porphyria. In 2003, samples of George III's hair and wigs were analyzed and arsenic was found in them, most likely a medication given to him for his illness that in a cruel twist of fate actually made his condition worse. 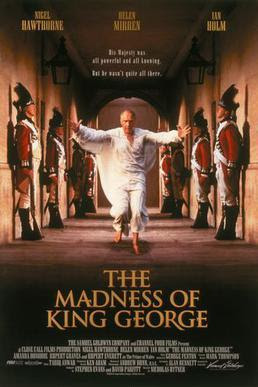 George III is often remembered as "Mad King George." In fact, the playwright Alan Bennett wrote a play called The Madness of George III in 1991 which was adapted as a movie, The Madness of King George in 1994.The play and movie focus on the unfortunate king's mental illness rather than his successful military campaigns during the Napoleonic Wars and his warm welcome of the United States to the international scene after the defeat of Britain in the American War of Independence. Rather, he is also remember often as the king who lost the American colonies (the United States was founded during his reign). Some bloggers have even asserted that if it weren't for porphyria, the United States wouldn't exist and we'd all be drinking tea and singing God Save the Queen today (presumably on the assumption that the king was crazy due to the disease and mishandled the colonies and the war).

However, a lot of scholarship now has a more positive outlook on George III's reign, the longest in British history up to that point. Let us try to look at George III like unbiased historians rather than Americans who are most familiar with the king as the despot who ruled with "absolute tyranny" to whom the Declaration of Independence was addressed. George III was actually quick to respect the United States as a new country, welcoming John Adams as the de facto ambassador from the US (his title was Minister Plenipotentiary to the Court of St. James's). John Adams did not stay at the court for long, however. According to US Department of State Historians, John Adams "became so frustrated with the cool reception [from George III's court] that he closed the legation in 1788 and the post remained vacant for four years."


It seems from his dealings with the infant United States that King George III was in fact a rather honorable man. He also enjoyed some simple pleasures. Sometimes remembered as "Farmer George," the King had somewhat of a green thumb, liked to tend to his garden, and was very interested in agriculture in general. He loved spending time at what is now called the Royal Botanic Gardens in Kew. He was also a skilled equestrian.

However, with regards to the king's disease acute intermittent porphyria, George III suffered attacks often. His most notable episodes occurred in the early 1780s, 1804, and 1810. He was immensely popular in 1810 but his deteriorating condition caused parliament to pass the Regency Act of 1811, officially titled the "Care of King During his Illness, etc. Act of 1811," of which this year is the 200th anniversary. The law passed control of the monarchy to his son, the future King George IV.

Suffering all the typical symptoms of AIP, the king also was almost totally blind and in chronic pain. It is rumored that he would speak for hours on end about nothing and sometimes would wander around nearly or entirely naked. He never learned of the death of his son Prince Edward, the Duke of Kent, Queen Victoria's father. He never knew that he was proclaimed King of Hanover and the Electorate of Hanover was elevated to a Kingdom. He died with his favorite son, Prince Frederick, the Duke of York, by his side on January 29, 1820 around 8:30 PM, in incredible pain, grief-stricken over the death of his youngest and favorite daughter Princess Amelia, and most likely conscious but psychotic until the bitter end. If ever there was a "tyrant" that one can feel sympathy for, it is the misunderstood King George III.

As a side note, I have a particularly strong interest in George III and porphyria. My grandmother suffered from acute intermittent porphyria and it is likely that my mother, my sister, and I all have inherited it. For more information on porphyria, or to help promote awareness of the rare but serious hematological disease, check out the American Porphyria Foundation and learn about the different porphyrias to become more aware. Here's an interesting tidbit to pique your interest: porphyria is sometimes cited as a cause or contributor to vampire and werewolf myths.
Posted by MLRscimitar at 8:08 PM